I believe you all had this experience at least once in your lifetime, where you make some purchase and bring it home and the color is wrong, or the taste is horrid, or you’ve just spent money foolishly and regret your purchase, and then you have to deal with the store owner in returning it or the corporate and unseen signs on day 8 that say “No returns after 7 days.” Or you get some unjust bill and, after calling customer service, you can’t adjust it and you pay it out of sheer desperation.

Let me tell you my story. At 14-years-old, I started to return things for my mother because she couldn’t think fast on her feet with her anxiety. She waited in the car and trusted that the return would go smoothly. When I came out of the store, I saw her quizzical look turn into a grin as I nodded my head that all had gone well. Back in the 1960s, nobody wanted to say no.

She went on sending me into the stores, plus a new thing developed. She trusted me at 16 to pretend  that I was her, calling about an unjust bill. Everybody had a boss, I learned from my father, and I went right to the top, bypassing customer service. If the operator didn’t say who was in charge, I hung up and called an hour later, falsely saying that I wanted to speak to the “person in charge” because so-and-so treated me “extraordinarily well.” Then the operator had zero reluctance to connect me and, once she did, I let that CEO or Assistant or VP have it with utter animosity that the bill was wrong.

“How did you get my number?” the person in charge sometimes said.

I told that same person that I was going to report the company to the Better Business Bureau (back when the BBB meant something) and 9 out of 10 times the issue was resolved. When I threatened legal action, even though our family didn’t even have a lawyer, the 10th one came through, too.

All through college I did the same thing for my mother, and when I was married at 21, and had a job right out of college as an English teacher, I went into the quiet nurse’s office from 12 o’clock on from time to time (she was gone by noon every day), closed the door, and did the identical thing.

So I was totally prepared to accept the position at the Philadelphia Daily News as a Consumer Columnist at 31, except now I had the power of the press behind me. As I got letters from Philadelphia and environs with people having trouble with the supervisor, and sometimes the head honcho, all the cases were settled, with the businesses scrambling to adjust or eradicate the bill that was charged to my reader.

All except one, years later, because the CEO threatened to withdraw his $500,000 advertising every week from the Philadelphia Daily News and, as a result, I was fired, out of the job I loved. But even so, the same techniques worked! Using an authoritative voice like I used to do, every case was resolved.

Fast forward 30 years and I received an unjust bill, but the techniques that I developed weren’t working  anymore. I had a stroke at sixty, a very significant one, that affected the right side of my body and affected my speech early on, that sometimes, particularly if I was tired, people wouldn’t understand my slurred speech. Often times, the person who answered didn’t connect me to the person in charge, much less to the CEO’s office. Or they would just hang up on me.

I stopped calling places and let my caregivers do it but, invariably (except Joyce #2 and Clare), they put a finger up for me to be still while they were saying the wrong thing. It was a mess. But as my speech improved over time, I made the calls myself. And then I got a bill that the was so unjust, I had to call again.

I fell off the chair in the Fall of 2018, which was stupid enough, and the bill was from the ambulance company for $1450 and was for a ride to the hospital, which I didn’t pay, resulting in my credit score going down over a hundred points. 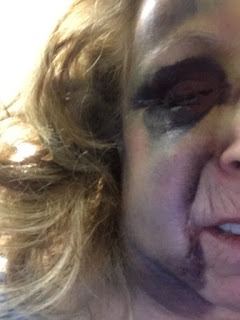 After the hospital checked me out and the ER doctor said all was intact, the hospital’s ER nurse, unbeknownst to me, called for a ride back to return home. (She called, not me!) Medicare said the ambulance company didn’t cover my ride going to the hospital, but they covered my ride back. That logic was unacceptable, so I appealed.

But Medicare didn’t receive the pile of papers that I sent them (and I appealed their decision, rejecting me once again) even though I sent them certified, including the the primary doctor’s letter that I couldn’t walk, and all the correspondence that I had collected over more than a year since then. I also sent the stack to the local ambulance company in Portland, the headquarters in California, the appeals officer–again, and to the CEO of the hospital.

I spoke with the Assistant to the CEO and she kept transferring me to the Business Office.

Before she transferred me one recent time, she said, “You know, the CEO is so busy with COVID-19 and….”

I shot back and interrupted her, “This issue has been going on a year and a half, and COVID-19 wasn’t even in the picture yet,” in a clear voice that even surprised me. And her, I’d like to think!

In short, I was getting nowhere. A representative from the Business Office said that information was wrong, a year and a half later. Medicare covered the ride to the hospital, but they didn’t cover the ride back.

So my successful technique that I had years before wasn’t working now. So out of pure desperation, I decided to contact the hospital once, and at times, twice a week for two months, and the old expression, the squeaky wheel gets the oil, came into play. I pestered them, and thought soon they would cave because of my annoying calls.

(By the way, says the Quote Investigator, “The earliest appearance of this expression located by QI occurred in a collection of stories published in 1903. Cal Stewart the author constructed a colorful raconteur character that he called Uncle Josh Weathersby. The saying under investigation was contained in an epigraph that was ascribed to this character:

“I don’t believe in kickin’,
It aint apt to bring one peace;
But the wheel what squeaks the loudest
is the one what gets the grease.”
—Josh Weathersby.”)

Anyway, as result of doing that very annoying strategy for two months, the Assistant to the CEO and I spoke, tired and annoyed to get a call from me every week, and she said the hospital would pay the bill, adding, “It’s not our fault.”

In the case of the unjust bill, what do you do? Just what I did. Do it all!

1. Call to the top tier of an organization first and maybe threaten to call your lawyer even if you don’t have one.

2. Send an email after every call to tell them what occurred, even if you know they remember. If you don’t have their email address, use the same method I did, by calling back in an hour and saying you want to give good news directly to the person in charge who helped you in an extraordinarily way.

3. Call the heck to the top tier (a la squeaky wheel and oil) They want you to forget, just to pay the damn bill.

Or write to me. I’d be happy to combat those shop owners or corporate monsters. But not now. So many people are out of work. I wouldn’t want to pile on. But when the virus isn’t a problem anymore, you know where to find me–hcwriter@gmail.com.

One more thing–this method that I used since I was a teenager works, and it did in my most recent case as well to have the hospital pay the bill, and I was especially happy, sheltered in place for now in these troubling  times, that it happened on my birthday!